Changing out of a Bipolar Writing Habit 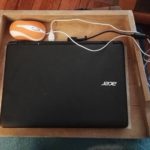 Today, I want to talk about a rather big change in my life. One that’s providing structure and happiness, in more ways than I expected.

You see, I finally decided to use my EFT knowledge and experience to get myself some writing discipline. I wanted to become a professional writer, with a professional attitude and writing habit.

In order for you to understand the magnitude of this shift, you need to know that I used to write in a rather bipolar manner.

On the one hand, I used to go for spurts of massive writing, hours and hours per day, being completely consumed by the story, immersed in my world, for months on end. In fact, when I started writing, that phase lasted for a few years. Yes, it was somewhat insane.

On the other hand, I’ve stopped writing for months and years in between. Completely dried up. Okay, for part of that time, I focused on EFT and the awesome changes it can facilitate. And I got training and passed the exame for my license as therapist. But writing just went out of the door.

Until it came back with a vengeance. Or until November came around with NaNo, and I burned myself out with doing 2k per day during it.

For the last few years, the pattern held. Months of massive writing, followed by months of blocks. I knew that wasn’t productive. It probably wasn’t even healthy.

This pattern wreaks havoc with any publishing schedule, after all. I lost lots of readers because I couldn’t finish part 4 of my Cloud Lands Saga series until a year after the rest. I started stories and let them wither. (I have dozens of unfinished stories and ideas on my hard drive.)

So eventually I thought I should fix that. And I have the means – I am an accomplished EFT practicioner, coach and therapist. I have helped many others change their habits, let go of beliefs and lift blocks. I just needed to apply that knowledge to myself.

That kind of decision is crucial for any change, by the way.

It wasn’t easy. I struggled with it for a week or three. Several times, I needed to tap on my resistance, my fears, my blocks. And I had a few friends who tirelessly encouraged me in chat. Most days, I forced myself to write in the evening, after procrastinating for most of the afternoon.

Once because I wrote such an intense scene that I couldn’t go on, although I was only at ~600 words. That’s okay. And the second time because I had a very, very rough day and ran out of energy before I could write. Blergh.

Twice. That was all. And I could forgive myself for that.

After four weeks, it became a bit of habit.

I found a structure that helps – I write in my evenings, it’s usually the last thing I do in the day. That works, because by now, writing is a source of happiness, and I like going to bed happy. I also have accountability, in my own FB group, with my chat friends, and on MeWe. And I keep a WordCount file.

Then I changed something else: I started using my cute little Acer laptop for my writing and started sitting on my balcony while doing it. (Which works perfectly because right now, we’re having a very nice summer in Germany, with late sunsets.) No distractions. Just the file, the story, and me.

Writing has become my happy time, a source of great satisfaction. But I only write for about an hour max, which means I’m not burning out on it. And for the last two weeks, with the help of balcony magic, I’ve been writing ~1,300 words per day. In flow. Easily. With Joy.

Since I started this new journey in writing, I have finished “Dragon Prey,” a novella set in my Cloud Lands world, much earlier than the other stories, though. That one has taken over a year to complete.

My first beta reader is on it. My cover designer is holding a spot for me. I’m aiming for a release in September. It’s exciting!

I’ve moved on the part 3 of a Science Fiction trilogy that I like to call “The Franssisi Chronicles”. The main character is a young human man called Zell, so whenever you see me mention him on FB or other social media, that’s the trilogy I’m referring to. I’m saving the parts up for a rapid release to launch my new pen name – Joanna Steenen – who writes explicit bed scenes.

Depending on beta readers and covers, I may actually get that out in October/November. I’m scaring myself, to be honest. And I need to really learn how to set up a good launch.

Want a preview of the blurb for the first one, “Captive”?

They catch him.
They make him a bed pet.
But Zell is not a pet by nature.

He is one of the few Wild humans left on Franssisi Four.
And as his Dile master finds out, his nature is indomitable.

There you go (yes, I am proud of it, so there). And no, it’s not truly about the bed scenes, although they are essential to the plot.

Writing like this, with predictable speed, allows for more planning that I’ve ever had for my writing. Yes, I still need to add systems for editing and formatting. I may choose to outsource more of that. This is all in the future.

The foundation, however, is regular production. And I finally put that into place.

The best part is that I’m having a ton of fun with that regular production. In fact, I am very glad I shifted out of that unpredictable writing into a very satisfying, joyful habit of writing every day.

My life is much, much happier because of this.

Which is the best part of all.

Hannah Steenbock is an author, dreamer, and coach. She has published several short stories in English and German, as well as one novel in German. In 2013 she started self-publishing her work. In 2014, she has won two awards for her short story "Sequoia".
View all posts by Hannah Steenbock →
This entry was posted in English and tagged fantasy, productivity, regular writing habit, Science Fiction, Tapping Into 1k, The Cloud Lands Saga, The Franssisi Chronicles. Bookmark the permalink.