I first wrote “Irina’s Revenge” in German, since it was meant to be published in a German anthology. I switched to English while writing it, so I could share it with my chat friends and ask for help with the plot. (I don’t often write SF.)

So I ended up with two versions of the tale, one in German, one in English.

The German one was published years ago. And when I saw an amazing cover for a really good price, I decided on the spot to self-publish the English version. 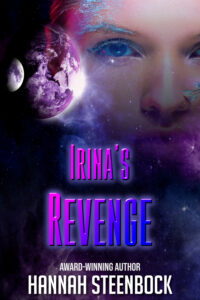 Irina hates space pirates. They killed her brother when they were kids.

So she became an agent of the Stellar Intelligence Services to avenge him. And now, she finally has her plan in place to end that scourge for once and all.

Except things are not quite as they seem… and they get worse quickly.

I no longer remember how that idea came to me. I do remember thinking it sounded hopelessly romantic – searching for a lost brother. Which is why I call it space opera.

And it was honestly a bit of a struggle to come up with a suitably corrupt system – I don’t do intrigue really well.

I did read it to a bunch of friends one day, in the German version, and they call cried at certain parts. Which is probably a good thing.

What People Say about “Irina’s Revenge”

“New author for me and I really enjoyed this fast-paced sci-fi story. It’s an interesting plot, a human female wants revenge on the pirates that killed her brother and so she takes a job working for a company that gets attacked by pirates all the time. Lot’s of action some twists and turns to the story.“
Sharon – Amazon review

“This is a story of women with revenge on her mind. But life does not always give you what you expect and it becomes complicated. This is an awesome short story that I highly recommend.“
Dr. Patricia Eroh – Amazon review

I want to read it!

You can buy “Irina’s Revenge” as an ebook in all stores, as Audiobook (narrated by AI)  through the Google Play store.

Never miss another release. And find cute little stories about my dragon pet Ember once a month in my newsletter.
Get it here.