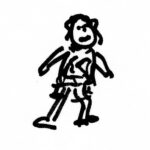 So the other day, I sat down and wrote out the first chapter of my new book “Goblin Invasion”.  Meet my wizard in this sneak preview:

Beginning of Chapter 1 of “Goblin Invasion”

Orren stretched, arching his back and gave a happy sigh. All rolls and loaves of bread were in the oven now, and he had some minutes to himself. He settled into his armchair which really didn’t see enough use and put his feet up on the stool that he had bought to go with it.

Baking and cooking were the most satisfying tasks he could imagine. Turning flour or vegetables into foods that made people happy was the best work in the world. Yes, it was a lot work running his bakery along with the tavern, but he didn’t mind.

He closed his eyes and just rested for a moment. His nights were always short, but he didn’t dare fall asleep. The rolls would have to come out of the oven first, and very soon.

Soft footsteps approached, and he knew a child was coming up to him, probably drawn by the scent of baking bread.

One of the best scents in the world, even if he thought so himself.

Smiling, he opened his eyes.

He had never seen a child like this, but he recognized the hungry look in its eyes.

Yes, he doesn’t look much like a wizard, does he? That’s because he doesn’t really know himself how much power he actually has. Never needed it, after all.

And of course, this is not a child, either, as he’ll find out soon.

I wrote Chapter 2 this morning, so there’s more to come.

The series will be called “The Blood Wars”. I finished writing “Goblin Invasion” in January, I have edited it, and I have a cover creation slot for April. I’m hoping for a release date in May.

I’m already writing the sequel, called “Druid’s Choice”. And guess what? A dragon has appeared in it. I knew there were dragons in this world, but I didn’t expect to see one this soon…

Don’t want to miss the release of “Goblin Invasion”?
Sign up to my newsletter!

Want to read another one of my books before I can release this one?
Start with “Dorelle’s Journey”, the first book of my dragon series The Cloud Lands Saga.

Hannah Steenbock is an author, dreamer, and coach. She has published several short stories in English and German, as well as one novel in German. In 2013 she started self-publishing her work. In 2014, she has won two awards for her short story "Sequoia".
View all posts by Hannah Steenbock →
This entry was posted in Writing and tagged fantasy, Goblin Invasion, novel, wizard, writing. Bookmark the permalink.