“Coming Home for Christmas” is a little flash fiction piece I wrote for today’s blog event on Turning the Pages Books. They provided this picture as a photo prompt. Alas, I do not know who to credit for it. At any rate, it made me think of ghosts, and thus, Peter came to life. Or… not.

I love this little story. And I like to pull it up around Christmas, simply because it embodies what Christmas means for me: Love and family. 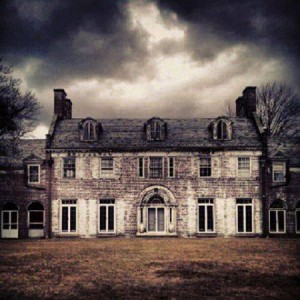 Peter lingered at the hedge surrounding the garden.

It had been a long, long journey back from the Continent. And it hadn’t been easy. It had taken months alone to cross the Channel, to find a boat where he could stow away unseen. The crossing itself had been surprisingly easy, despite the sea. He hadn’t even gotten seasick, quite different from the journey out with his regiment.

Then he had to make his way across country, to come back home. And that had been difficult and confusing as well, since he couldn’t use the trains. Also he had to travel mostly at night, which made it harder to use landmarks.

Finally, he had made it back here, back where he had grown up.

So much had happened that he didn’t even feel like himself anymore.

They said that war would change anyone. And it was true. He had discovered good sides in himself as well as bad sides. He had wet his pants more than one time, and also surprised himself with courage.

Some would say he had grown up in the trenches of France.

Others would say they had destroyed him.

Peter sighed and decided to put it all behind him.

Gently, he glided up to the old house, made of solid rock, built to last. The large main wing, with the round door top, the big windows reaching all the way to the ground. The two side wings, slightly smaller, slightly set back. His bedroom had been in the right annex, up under the attic. Idly he wondered if another child would be sleeping there now.

Longing for the carefree times he had known as a boy, the long rambles through the countryside, riding his pony, wheedling sweets from cook.

There was a bunch of holly on the door, along with a twig of mistletoe. He stared up at it. Mother would never have allowed it, but she was dead from the flu, he had found out that much.

He could hear sounds in the house, children laughing.

Peter slipped around to the left annex, where the dining room was. There he stared through the tall windows.

A Christmas tree sat in the corner, with the candles blazing. John was carving a turkey, and he was sure that the pots on the table held parsnips, roast potatoes and cranberry sauce. His mouth watered despite himself. He watched the children, little Peter and Sophie sit straight and well behaved, while John’s wife Elizabeth was smiling proudly.

Peter pressed closer to the window, drinking in the sight.

“I wish Uncle Peter was here”, little Peter said. “I’m sure he would love the dinner.”

At this moment, Peter floated through the glass and stood inside the dining room, invisible. Obviously, that innocent comment had been enough of an invitation. Quietly, unseen, he settled into an armchair in a corner.

“Yes, I wish he knew we’re keeping his old bedroom for him,” Sophie chimed in. “So he has a place to stay, always. And he should be home for Christmas, don’t you think?”

Elizabeth’s smile deepened. “Thank you children, for remembering your uncle, especially today. I have a feeling he’s not very far at all.”

Her eyes met her husband’s with a sad, little nod.

In his corner, Peter smiled the faded smile of a ghost. Peace and love filled his heart, where only emptiness and longing had been.

He was home now, home forever.

Genre: Fantasy/Horror
Author: Hannah Steenbock (which is a pen name)
eBook: Yes
Dedication: May all the fallen find peace.

Feel free to leave any comments below. (Did I mention I love comments?)

Hannah Steenbock is an author, dreamer, and coach. She has published several short stories in English and German, as well as one novel in German. In 2013 she started self-publishing her work. In 2014, she has won two awards for her short story "Sequoia".
View all posts by Hannah Steenbock →
This entry was posted in English and tagged Christmas, fantasy, flash fiction, ghost, Horror. Bookmark the permalink.